VHS tape cassette box art is generally a pretty poor indication of the quality of the movie contained within and Timerider - The Adventure of Lyle Swann is no exception.

I took a look at the cover art and expected this to be complete trash and was surprised to find that it's not. This is a good movie! Not just good in a cheesy VHS kind of way, but objectively good.

Yeah, its got a eightiestacular synthy/metal soundtrack, but this is mostly at the start. It gets more synth/metal/cowboy as the film progresses and it actually works well. The acting is good, the costumes are good, the plot is good and it's action packed without resorting to ridiculous stunts. How has no-one heard of this movie?

It predated other '80s time travel flicks like The Philadelphia Experiment (1984), Terminator (1984) and Back to the Future (1985) and as soon as I get my time machine back working again, I'm going back to the '80s to find out if it had an influence on the Terminator movies, cos it sure looks like it.

This movie is (Spoiler Alert) exactly what would happen if you entered the Baja 1000 and accidentally strayed off course into a Top Secret Government Time Travel Experiment that zapped you and your motorcycle back to the Wild West of 1877 where you became your own grandfather. 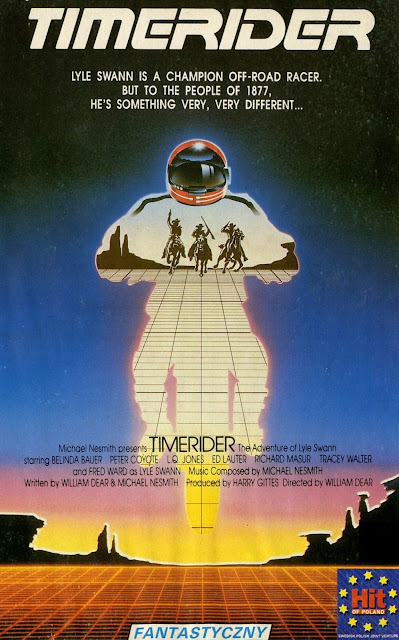