The MERCENARY Guide to Buying a Really Cheap Motorcycle 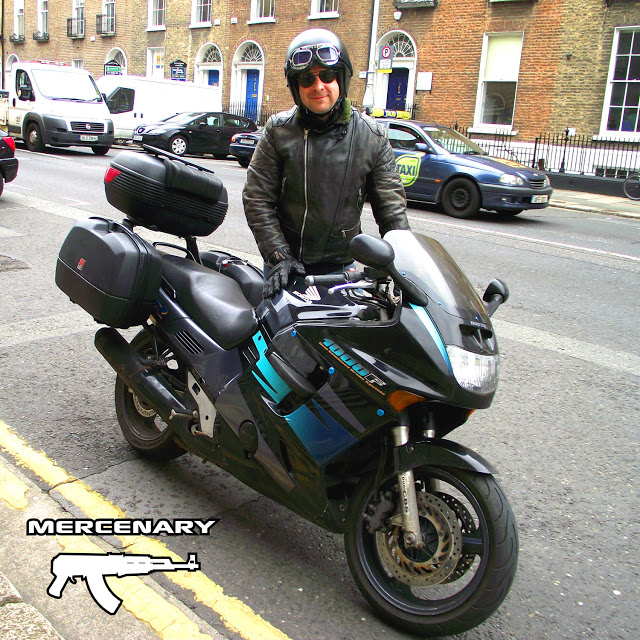 In Ireland Right Now, it's a Buyers Market. This wasn't always the case. During the 70's and 80's Ireland's economy was in recession, unemployment was high and most motorcyclists couldn't afford new machines. Sales of new bikes here were low and consequently the second-hand market was restricted. This relatively large demand and low supply in Ireland kept second hand prices high. Up until the early '90s it made sense to import bikes privately from the US or UK.

Japanese Domestic Market Imports
By the mid '90s, this demand for 2nd hand bikes led to the import of a large number JDM bikes. They were shipped here by the container-load from Japan where they were effectively worthless. Supposedly, there was no second hand market in Japan and if you bought a new bike in Tokyo, you had to pay a substantial disposal fee for your old one. So people just parked them up in the street, removed the number plates and abandoned the bikes to their fate.

This is why so many couriers rode Honda 400 Bros' and CB400s. It's also why you still see plenty of unusual machines here like Honda CX400s, CBR250RRs, 250cc Katanas and those little 250cc Dominator clones. There's a lovely little late 90's GPZ250R parked near here that I'm pretty sure came from Japan.

There were also a lot of mid-size dirt bikes and Paris-Dakar type bikes imported from Italy. There was a really tasty Aprilia Tuareg Wind 600 going for a song in Dublin recently.

Bikes from the US tended to be older and larger. A lot of the 70's Kawasaki Z1s in Ireland originated in the 'States. And you still see the occasional 700cc Honda here - 750cc machines sleeved down to beat an import tariff imposed in the US market to fend off competition from a troubled Harley Davidson during the late '70s.


The Celtic Tiger
By the late '90s, the economy of Ireland was booming and sales of new motorcycles increased accordingly. I suppose many of these machines were bought as playthings. In Dublin, a dedicated Ducati dealership and more recently, a Harley franchise were established to meet demand for these high-end products. Consequently, Ducatis and Harleys are fairly common here now, whereas in the past they were considered pretty exotic.

BMW GS's, Yamaha R1s, Hayabusas, Blackbirds and other prestige bikes sold like hotcakes here during the noughties. These bikes are now making their way back into a depressed second-hand market and prices are generally lower than in the UK and the rest of the world.

That's all well and good, but that's not what we're about here at MERCENARY. We're interested in cheap bikes. Really cheap.

What's important here is that a lot of those bikes that were imported over the last twenty years are still around and for all practical purposes, nobody wants them. There is, and probably always will be, a market for late model bikes but who wants a 1985 Honda Sabre 1100?

Weird, Old Japanese Bikes
And what the hell is a 1985 Honda Sabre 1100 anyway? Google it. The salient points are it was manufactured by Honda so it's well built and reliable, and it made 120 horsepower so it's pretty quick.

There are another couple of salient points that I won't dwell on - it's heavy and the brakes aren't up to much. There was one of these behemoths for sale here about a month ago with very low mileage (I think it was less than 10k). The asking price was €1,300 but I expect it sold for less than that, maybe a grand.

So weird and unfashionable generally means cheap, but it doesn't have to mean uncool. A 1976 Yamaha DT 400MX? Steve McQueen probably had one. And I'd take a DT400MX over a late model 250 Ninja any day.

Yamaha Fazer 600s anyone? Not the late-model Fazer with the upright riding position. No, the weird muscle/cruiser hybrid a bit like a V-Max.


Fashion Turns
Sports bikes are currently very fashionable in Ireland. Ninjas and GSXRs and suchlike are sought after and although they're generally less expensive than in the UK and elsewhere, they're not exactly cheap.

Adventure bikes are also currently trendy thanks to Ewan McGreggor and Charlie Boorman's exploits and are consequently expensive.

And some models just have a cult following and hold their value - Africa Twins, Pan Europeans, V-Maxes and Moto Guzzis are weirdly expensive.

Recently, I saw an Africa Twin going for €5K! That makes no sense to me. Africa Twins are great but for 5 grand I can get a low mileage KTM 950 Adventure. And I saw a Pan Euro with 90,000 miles going for over 2k. Pans are reputedly very reliable but I just wouldn't consider buying a bike that's done 90,000 miles. And certainly not for two grand!

During the 90's, sports tourers were all the rage. Now, because it's all Hyper-sports and Adventure Bikes, nobody wants sports tourers anymore. So FZR1000s, CBR1000s, ZZR1100, GSXF 1100s can be picked up for about a grand. I bought a slightly tatty '94 CBR1000F with 39k miles last October for €600. It needed a rear tyre (€130 or so) and a battery (€50), both of which I replaced on the day I bought it, and new steering head bearings (GB£20 on Ebay) which I replaced a week later. So a total of about €800. Since then I've done three and a half thousand fast, comfortable, trouble free, wintery miles on the thing and only now is it due for a service. That's 134 hp and 165mph for €800 with Honda build quality and reliability.

There are loads of models that just went out of fashion. An FZR600 is for all practical intents and purposes (except racing on a track maybe) the same as an R6. These were extremely popular in the mid 90's but there are very few left now. When they do turn up they tend to be very cheap. Similarly, the country was awash with red and black Suzuki GSX 750/1100Fs 20 years ago. They had the same motors as the GSXRs but were a bit less sporty and a lot more comfortable. They were everywhere, driven two-up by young men in over-sized leather jackets, denim jeans and trainers. They're rare now but when they do show up, they're cheap. The CBR600F was the best selling bike in the UK for most of the 90's - now they look sort of blobby and nobody loves them (Except the pre-injection racers in Mondello).


Doing the Deal
Buying and selling motorcycles and parts privately is kind of a hobby in it's own right. It's fun and it's a good way to meet people and learn some interesting things. Don't treat it with trepidation, just get stuck in. Some sellers won't haggle and some can be dismissive and rude. Fuck 'em. Don't deal with them. And some buyers are headwreckers. They show up, tell you your bike is rubbish and offer you about half of what it might reasonably be worth. Fuck them too. Ideally, both parties should walk away happy - it's a game. It's supposed to be fun.

There are a couple of strategies to this. Generally, the asking price has some haggling room built in. Also, the longer the ad is up, the more unsure of the price the seller becomes - you'll see bikes go up for stupid money, say €2,000 for a 1994 Ducati 600SS. That's unrealistic. A reasonable value for that bike might be €1,600 but this is a depressed market and that's not a popular bike. Over the course of six or eight weeks the price drops to something sensible like €1,200.

So waiting is a good idea. Then when you go to see the thing, a wad of cash and a way to take the bike away right then (either ride it away or load it into a van) works wonders. If the seller wants €1,200, its likely that an offer of "€1,000 cash and I'll take it right now" might seal the deal. Everybody's happy.

In a lot of cases, particularly where the bike has been laid up for a while, the seller is under pressure from a wife/girlfriend/mother to get rid of it. The seller may be conflicted. Partly, they have a romantic attachment to the bike or maybe they feel as long as they have a bike they can still identify as a biker. And partly they're getting grief about the thing and they see it as a liability. And partly they might like the idea of having a wad of cash to spend on their wife/girlfriend/mother- there are ways to exploit this inner conflict.

In any case, you need to strike up a rapport with the seller. Playing hardball, dissing the bike and offering stupid money from the get-go will only antagonise him. Encouraging him to think that his bike is going to live on in the hands of someone who will cherish it and have adventures on it might put him in a more sympathetic frame of mind. So don't tell him you're going to take his beloved CB750K and paint it matte black or turn it into a cafe racer.

Sometimes you see bargains though and the bike sells almost immediately. You need to recognise these for what they are. There was a BMW R100RS on DoneDeal last year for a grand. I wanted it. It went before I could do anything about it. If you see a bike like that, don't wait and don't haggle. Just go and snap it up. 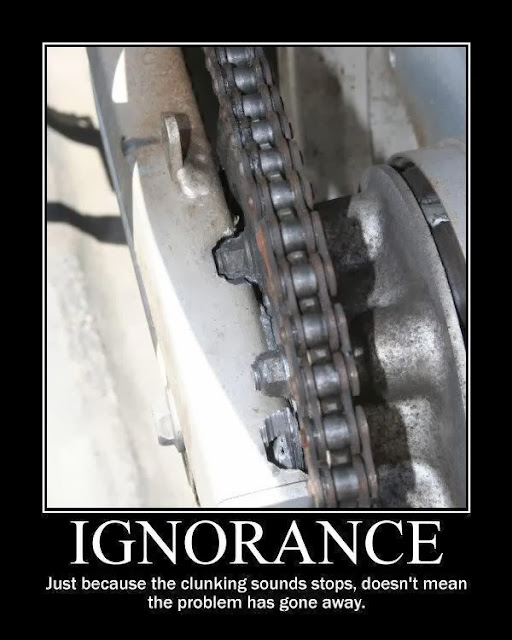 Things to Watch Out For
Consider the following for EVERY bike you look at. What looks like a cheap bike needing some work can be a money pit. For example, leaking fork seals are fairly common on older bikes. The replacement seals and oil are only about €30. The problem is, replacing them is outside the comfort zone of most motorcycle riders and so you might have to consider getting this done professionally. I'd imagine this is about three hours labour - say €120 plus parts plus VAT. So maybe the total is €200. That's a lot of money relative to the €600 you spent on the bike. The same is true for steering head bearings so if you are getting fork seals done, it might be an idea to get the steering head bearings replaced at the same time. A lot of the labour is common to both. See below for a list of possible issues and the approximate costs of parts. *Some Yamahas have 20 valve shims. Most bikes use 2 or 4 per cylinder and you generally only need to replace a couple of them at a time. A lot of Hondas and smaller bikes don't have them at all, instead using Screw and Locknut adjusters. Most riders don't feel comfortable replacing valve shims. This is the No. 1 reason why Ireland is full of Kawasaki air-cooled Fours that won't start.