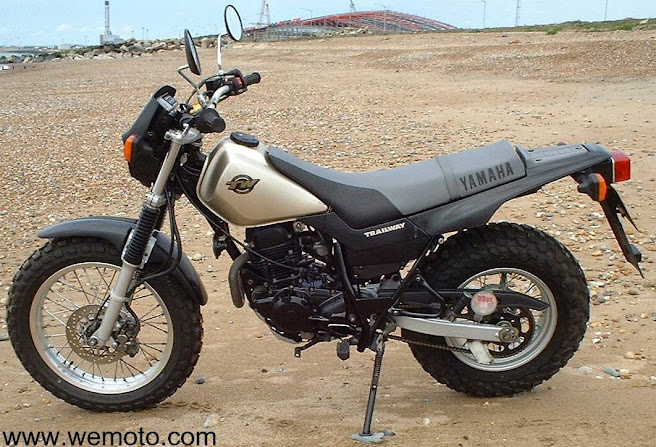 A couple of years ago I got a call from a friend of a friend looking for a small motorcycle. The bike had to be a 125cc for insurance reasons and the budget was a €1000. After a few questions I narrowed the brief down to something four-stroke and Japanese-built. And for a variety of reasons, a dirt bike would be advantageous.

A quick look at DoneDeal (http://www.donedeal.ie/) turned up a Yamaha TW125 Trailway. The bike was about 10 years old and had some cosmetic damage from an off-road crash but was in otherwise good condition. Crucially, it only had about 700km on the clock - it was practically brand new!

I went out to look at the thing on my Buell. Apart from a small dent in the tank and a scrape on the front mudguard it was in showroom condition. I didn't even haggle - I just handed over the asking price. The guy followed me home on his Guzzi. I parked up the Buell and got a lift back with him to pick up the little Yamaha.

I loved it. My first bike was a Yamaha DT80LC and the TW made me very nostalgic. It had exactly the same clocks, fairing and bars. And the switchgear was the same except for the electric start button. Even the tank looked the same once you were on board the thing. And it had the same complete lack of pulling power. However, it had lovely, stable handling and unlike my old DT, the brakes were pretty good.

I was enjoying the nostalgia so much that I rode the long way round to the workshop, taking in some  off-road trails on the way. Apart from the lack of power, it was a lovely little machine and riding it off-road was very unusual. The big tyres floated over loose sand and gravel and the tiny engine pulled with very little drama. Whereas normally, loose sand needs to be approached with a little aggression, the TW just trundled over it like a quad-bike. It was a very competent and confidence-inspiring trail bike.
I rode out to the workshop and gave the bike a quick once-over, adjusting the mirrors and controls, pumping the tyres and topping up the oil before heading back home, pleased with my evening's entertainment.

The following Saturday morning, I got up early, strapped a small rucksack to the TW's rack and set off on a 200 mile (320km) journey to County Cork to deliver the bike to its new owner. With only 11 horse-power at my disposal, opening the throttle all the way saw the speedometer needle slowly climb to a little over 50mph (80kph). That's okay. 50mph isn't terribly fast, but I felt I was making progress, the weather was bright, mild and dry and I was happy to be out on any kind of motorcycle adventure.

The first hour or so on the motorway passed happily enough. Then I began to get bored and I reasoned that riding on the A-road that ran alongside the motorway might be a bit more entertaining. I stopped for fuel early, partly to break the monotony and partly because I had no idea of the fuel range of the bike because I knew neither the fuel economy (which I guessed was probably upward of 70mpg) or the size of the tank (which I guessed was pretty small).

Based on prior experience, I was anxious about going onto reserve on the motorway and having to drive a further maybe 10 miles to the next exit before desperately searching for petrol in rural Ireland with a severely diminishing amount of fuel. Range anxiety is something that troubles me a lot and is one of the reasons I love my CBR1000F so much - on a long trip it'll do between 180 and 200 miles before reserve.

My morale was doing okay up until this point but it was about to take a turn for the worse. You see, the terrain on the first part of the journey was reasonably flat but as you head south it gets hilly and the further south you go the hillier it gets. And the TW125 doesn't cope well with hills. On uphill sections, the speedo needle would slowly drop from 50 to 40mph and 5th gear would drop to 4th...

And then it got windy. And the TW125 doesn't cope well with headwinds. On windy uphill sections the speedo needle dropped to 30mph and 4th gear dropped to 3rd gear and I was forced to crawl along on the hard shoulder like a piece of agricultural equipment. And that wasn't much fun. It was frustrating and I began to wish the journey was over, and once that happens, well it's all downhill from there...

Except it wasn't downhill. In terms of distance I was only halfway there, and most of the rest of the journey was uphill and the further south I went the stronger the headwind became.

It was a miserable journey. And I thought about that mathematical frog that could jump only half the distance to his destination. And I really knew how that frog felt as the further I went, the slower I got and I became despondent and lonely and I felt I would never arrive.

Its funny how your sense of reality can become so distorted by low morale. I hated the TW and I hated every minute of the second half of the trip. In retrospect, I should have taken a detour to visit a local landmark or maybe stopped for something to eat to try and recoup the fun of the trip. Instead, I just fixated on getting to the end, which is no fun at all...

So I eventually reached my destination. It took me over five hours to do a journey that normally takes me less than two and a half. After some food I felt a bit better about the bike. On balance I really quite liked it. It was very easy to ride, particularly off-road and it was visually appealing with its clean lines and enormous tyres.

On the down-side, the build quality wasn't so good - pretty similar to my DT, with thin paint and rust-prone fasteners. And obviously the lack of power was the real clincher. But if only it had the power to maintain 60mph on the highway, I would have kept the thing for myself.

Which finally brings me to the point of this article - There's a 200cc version of the TW available and you can make it look like this... 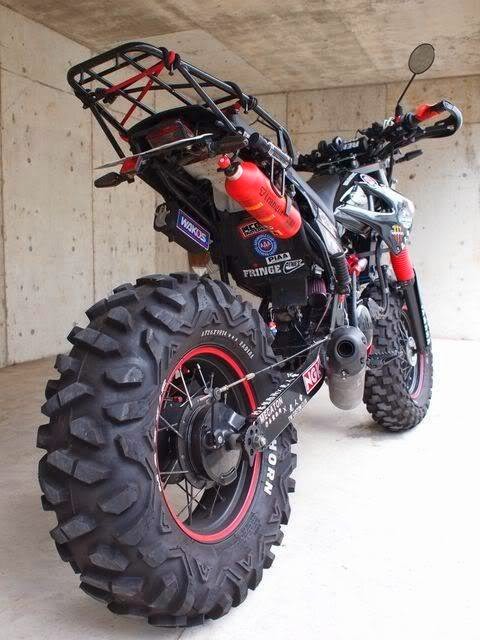