MERCENARY is currently lamenting the loss of see-through stuff.

When I was a child my world was filled with cutaway drawings of Harrier Jump-Jets, Space Shuttles, Hovercraft and other technological marvels (Salter Duck anyone?). These drawings were pretty commonly featured in magazines and comics of the time to meet a demand for a future that hadn't quite arrived yet. There was a sense at the time that there was a better destiny just around the corner if could just hang on a little longer and these drawings were a way for people to satisfy their curiosity about these new technologies.

So the future did arrive in the mid '80s* and one of the points of impact was the 1985 Suzuki GSXR 750. At first glance, the image below looks quaint and a little old fashioned but try to look at it from the point of view of the pre-future...

But mostly, it looked like nothing that had come before. It was brutally futuristic and that future was tangibly technological, powerful and Japanese.

I may be nostalgic about the future, but I'm not cynical. The future did arrive and now in the post-future we are surrounded by technological marvels that we take for granted. People are generally better off in terms of food, education and healthcare and that stuff is important. For the most part, the world is a better place than it used to be.

But I do miss the sense of marvel and novelty embodied by all those cutaway drawings.


*The future has been slowly arriving since the industrial revolution, but noticeably a big chunk of it arrived all at once in the mid '80s. 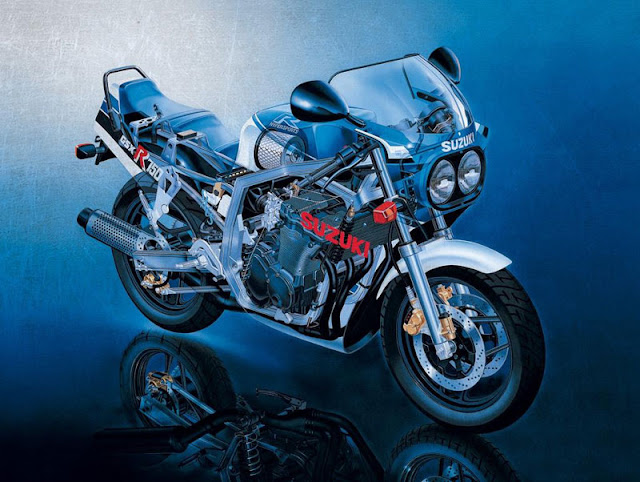